Venezuelan president Hugo Chávez has won, yet again, the presidential elections on Sunday October 7, with a comfortable margin of 54.84% against the 44.55% of his opponent Henrique Capriles. This is another victory for the Bolivarian revolution which should be used in order to carry out the revolution to the end. 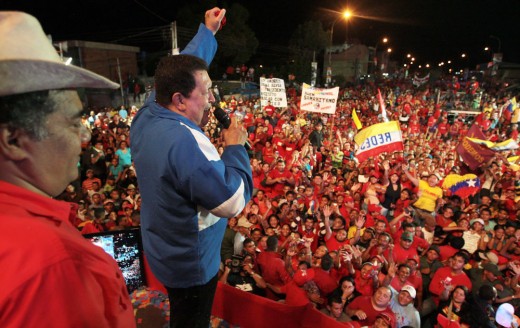 With over 95% of all votes counted, Chavez received 7,860,982 votes, and the candidate of the oligarchy and imperialism 6,386,155 votes. The turnout was an amazing 81%, beating even the previous record of the 2006 presidential elections which saw a 74% turn out. This showed the extremely polarised nature of this campaign, in which both camps mobilised all of their supporters.

One of the main features of the election day was precisely the massive level of participation. The Bolivarian campaign had made an appeal for people to wake up early in order to vote, so as to achieve such a clear result which would pre-empt any attempts of the reactionary opposition to cry fraud.

A comrade from Venezuela reported how some started to queue outside polling stations even the night before. At 3 am the chavista wake up call could be heard in working class and poor neighbourhoods in Caracas and throughout the country. By the time polling stations opened at 6 am, there were already long queues of people waiting to cast their vote, and the situation continued during the day.

At 6 pm, polling stations were supposed to close, but Venezuelan election rules say that as long as there are people waiting to exercise their democratic right to vote, polling stations should remain open. This was the case yesterday, with some polling stations remaining open until 8.30, two and half hours after the established time.

By then it was already clear that the counterrevolutionary opposition was becoming nervous. Capriles asked for all polling stations to be shut by 6.01 pm. The reason was clear: in the upper class areas of Caracas the polling stations were deserted, while in the working class and poor areas hundreds were still queuing up to vote.

There was a report, for instance, of a polling station in Antímano, Caracas (which voted 75% for Chavez), where 75% had already voted, but there were still 800 people waiting in the queue. In general the turn out in the more working class areas where Chavez got his biggest vote, was between 3 and 5% higher than in the upper middle class and upper class areas where Capriles won.

Even before the official closing time of the election, the opposition was already preparing a campaign of dirty tricks. Rumours were deliberately spread about so-called “exit polls” which gave Capriles an advantage over Chavez's, in some cases of even 10 percentage points. These were aimed at creating the impression that Capriles was winning and thus make any official results showing a Chavez victory doubtful. Scandalously the Spanish right wing newspaper ABC published a huge headline on their website announcing: “First exit poll shows Capriles victory”.

This was the continuation of a continued barrage of propaganda in the last few months which we have analysed elsewhere. On election day itself, the “liberal” El País in Spain, one of the most vociferous in its support for Capriles, published an editorial under the title of “More than a vote – Venezuelans are choosing between two antagonistic social models.”

It then described the election as a plebiscite over “the continuation of the president's autocratic regime … a model of government based on personal charisma and the perversion of democracy”. In its Monday edition (printed before the results were announced), it continued in the same vein: “two opposite political projects are confronted: the hegemony of populist caudillismo or the recovery of liberal democracy. The most trustworthy opinion polls show a technical draw.”

The Venezuelan presidential election was indeed the choice between two models. Although the campaign of Chavez started on a very soft line “Chavez is the heart of Venezuela”, it then became more radical and was filled with a clear class content. In the last few weeks Chavez concentrated in denouncing a document written by a number of economic advisors to the Capriles campaign revealing their real plan. The document was basically a massive austerity package, including cuts in social spending, attacks on pensions and labour rights, etc.

Chavez correctly warned that the implementation of such a plan would lead to civil war (as happened in 1989 when Carlos Andres Perez implemented an IMF package of cuts). In his huge closing rally, which attracted probably over two million people, he explained how “in 1989 in the streets of Caracas the world revolution started, which has now reached the streets of Greece, Spain, Portugal and the rest of the world”·

The capitalist media twisted this and reported it as Chavez threatening a civil war if he lost the election. But the masses understood clearly what was at stake. The recent wave of protests in Greece, Portugal, but above all Spain also played a role in mobilising the Bolivarian masses of workers, peasants and the poor. They knew that, beyond the rhetoric of a “youthful centre-left” candidate, Capriles represented the same brutal attacks on the masses as Rajoy in Spain. The effect was multiplied because in Venezuela there have been important real achievements of the revolution which have raised the living standards of the majority, their access to health care, education and now also housing.

The fact that Capriles had to hide his real program and present himself as a Lula-type social democrat, is an indication of how far to the left the whole of Venezuelan public opinion has shifted over the last 14 years of the Bolivarian revolution. His only chance was to fool the people into believing that he was a supporter of the social programs of the revolution. But the people were not fooled.

Despite all the criticism which there is amongst the Bolivarian rank and file against the bureaucrats and careerists which are so dominant in the upper echelons of the movement and in governorships and local municipalities, the masses were mobilised, once again, by the threat of the counter-revolution getting the upper hand.

Chavez won in 21 out of 23 states in the country according to the CNE figures. There seems to be a dispute over who won in Miranda, where Capriles was the governor. The latest official figures, with 98.3% of the votes counted give Chavez a very narrow lead of only 743 votes out of 1.5 million, which would mean 49.76% for Chavez against 49.71% for Capriles. If this were to be confirmed, it would mean that the Bolivarian revolution would recover important states which it lost in the National Assembly elections, like Zulia, Carabobo and Anzoategui. The opposition would only manage to keep the two Andean states of Táchira and Mérida.

Chavez received over half a million votes more than he got in 2006 and nearly 1.5 million more than the PSUV got in the national assembly elections of 2010, but it should also be noted that the opposition increased its vote by 2 million since 2006.

As the official results were being announced by the National Electoral Council, there was a doubt over what the opposition would do. All along they had had a “plan B” ready. If the results were close they would cry fraud, use the so-called “exit polls” to sow mistrust in the results and come out on the streets to attempt to create chaos and violence, to give the impression that Chavez had only won by sly means.

The Bolivarian masses were mobilised, waiting in streets and squares, ready to respond to any provocations. But in the end the size of the defeat was so big that the opposition realised they had no chance but to recognise the defeat. Capriles' acceptance of the election results does not represent a demonstration of his democratic credentials. On the contrary, what he understood is that to launch into an adventure at this time could have had the opposite effect. It would further radicalise the Bolivarian revolution and putting the power and privileges of the ruling class in mortal danger.

The most intelligent sections of the ruling class understood all along that they could not win this election against Chavez. They now want to capitalise on the 6 million votes they got (their highest result ever) and play the long game of hoping for Chavez's illness to prevent him from finishing his term of office.

They are also setting their eyes on the regional elections in December. They know full well that there is no-one else in the Bolivarian leadership who commands the same level of support and authority amongst the masses and that while they mobilised to defend Chavez and the revolution, it will not be so easy to do so in defence of “Bolivarian” regional governors or candidates which in many cases are seen as corrupt, careerist and alien to the genuine spirit of the revolution.

This is an outstanding victory which reveals the fine class instinct and highly developed political level of the Venezuelan masses. The victory itself fills them with a sense of enthusiasm, of having defeated the reactionary oligarchy once again. No doubt, the “Bolivarian” bureaucracy” and the reformists will now say that the country is split down the middle”, that the president “must rule for all Venezuelans,” and will try to turn this election victory into a defeat.

The masses, as in 2006, voted decisively for socialism. In fact, one of the central planks of Chavez's program is precisely the idea that the revolution must be completed. In his election victory speech from the “people's balcony” of Miraflores Palace, he said it clearly: “Venezuela will continue its march toward the democratic socialism of the 21st century.”

The deep current of dissatisfaction against the bureaucracy and the reformists within the Bolivarian movement, which has been kept under check during the campaign for fear of rocking the boat, will now certainly come onto the surface. This current is represented by movements like the National Movement for Workers' Control and Workers' Councils, the Bolivar Zamora Current (around the National Ezequiel Zamora Peasant Front), the Socialist Guayana Plan and others.

For now, the main danger has been defeated by the masses, but a revolution cannot remain indefinitely at the crossroads. Chavez has made some inroads into the rights of private property, but the Venezuelan economy and state apparatus remain fundamentally capitalist and are still dominated by the 100 families of the oligarchy, inextricably linked to foreign imperialism.

The only way to guarantee the conquests of the revolution on a permanent basis is to expropriate the key points of the economy under workers' control, so that the country's vast resources can be used, under a democratic plan of production to satisfy the needs of the majority. Such a move would signify the abolition of capitalism. It would immediately face the wrath of the ruling class in Caracas, Washington and Madrid, but would count on the sympathy of millions of workers and peasants in Latin America and also in Europe which are suffering the consequences of the crisis of the system.

The capitalist media is right on one thing: in Venezuela what is at stake is the struggle between two opposite social systems – on the one hand capitalism (which has proven its bankruptcy in the eyes of millions), on the other socialism, that is, the common ownership and democratic planning of the means of production.

It is time to move forward!