Internationally, capitalism is emerging from its worst crisis since the 1930s. There is palpable relief in the ranks of the ruling class at avoiding a financial meltdown. However, despite heated talk of green shoots, there is a universal gloom about the current situation.

In September, job losses in the USA jumped by a much worse-than-expected 263,000, hitting a 26-year high. It was the 21st consecutive month the US economy had shed jobs. Since the recession began nearly two years ago the number out of work in America has doubled from 7.6m to 15.1m. The average working week fell back to 33 hours, while wages have fallen by 5%, further undermining consumption. The $787bn stimulus package is not having the expected effect and there is serious talk of a double-dip recession.

In other words, the capitalist crisis is by no means over. The massive crisis of over-production is exacerbated by widespread over-capacity in practically every sector of the world economy. “Unless we deal with excess capacity, it will wreak havoc on all countries,” states Justin Lin, chief economist at the World Bank.

Britain has already experienced a fall in production greater than in 1931. Rising unemployment is on target to reach 3m in 2010, while some estimate it could reach 4m. The government’s efforts to bail out the banking system have undermined public finances, as unemployment rises and tax revenues collapse. Over the next two years the government will need to borrow a staggering £350bn. “This financial year, the UK government is forecast to spend £4 for every £3 it raises. Never before, in peacetime, has the UK run such a deficit”, stated Martin Wolf, economic strategist at the ‘Financial Times’.

“A financial implosion can do fiscal damage comparable to that of a sizeable war”, continues Wolf. “Indeed, this is quite likely to prove the fourth most adverse fiscal event since 1800, after the second world war, the first world war and the Napoleonic wars.” (FT, 5/6/09).

These debts will have to be repaid. This will mean massive cuts in public expenditure, tax increases and higher interest rates. Given the precariousness of the recovery, such measures could push the economy back into recession. British capitalism – and the working class who will be asked to pay the bill – will be caught between a rock and a hard place.

The situation has become even more disastrous with the British economy’s reliance on banking, financial services and the City of London. There is much talk of the need to rebalance the economy, but it is much too late to recreate a vibrant manufacturing sector. British capitalism through the short-term interests of the ruling class has become completely dominated by finance capital. Between 2005 and 2007, the financial and housing sectors made up 60% of the growth of the UK economy. This was a consequence of myopic Thatcherism and the dash for quick profits. This is the main reason for the long-term decay of British capitalism.

New Labour continued this worship of the City of London. Lack of regulation was regarded as a virtue that would guarantee London as the financial capital of the world. Despite the financial crisis and the role of the banks, the City will have an even greater sway over a new Tory government. Already Cameron 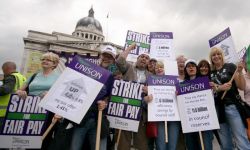 As the banks were bailed out because they were “too big to fall”, manufacturing industry was left to its own fate. However, there can be no sustainable recovery without massive investment. But with a crisis of over-capacity and limited markets, there is no incentive to invest. As a result, UK business has slashed investment by the biggest amount since the 1960s. Business investment has fallen more sharply over the course of the recession than in the downturns of the 1970s, 1980s or 1990s. “Unless this trend can be reversed, the ... productive capacity of the economy will be damaged, and the country will lack the necessary capital stock to sustain a recovery,” stated David Kern, chief economist at the British Chamber of Commerce. Manufacturing was already back in recession in August.

With the decline of consumer spending, due largely to high levels of debt, falling house prices and the threat of unemployment, together with the collapse of private investment, demand over the past period has come mainly from government spending. But this is about to go into reverse, which will serve to intensify the crisis.

There has been a hue and cry in the media over the “excess” spending of the bloated public sector. All the main political parties have joined the affray. Cameron has said the actions of a new Tory government will make it the most unpopular government since the war. Nick Clegg, leader of the Liberal Democrats, has talked of the need for “savage” cuts as well as a long-term freeze in the pay of public sector workers. While, Gordon Brown (Labour PM) spelt out to the TUC “cutting costs where we can, ensuring efficiency where it is needed, agreeing realistic public sector pay settlements throughout, selling off the unproductive assets we don’t need to pay for the services we do need.” This was followed by Ed Balls, the minister for children, schools and families, who announced £2bn cuts from the school’s budget and Andy Burnham, the health secretary, promised that the NHS would find “efficiency savings” of £15-20bn. Whoever wins, this is a clear sign of what lies in store for public services and public sector workers.

Austerity has become the battle-cry of the ruling class. This is no fine tuning exercise but the use of the axe. British capitalism can no longer afford the reforms of the past. Any temporary gains that have been made will be swept away. Top civil servants have been sent on courses to study the austerity programmes of the 1920s. In particular, they are studying the Geddes Committee which recommended cuts of 25%. In the 1920s, under the pressure of the crisis, stern austerity measures were taken to balance the books. This led to massive cuts in public spending and reductions in pay. “All the workers of this country have got to take reductions in wages to help put industry on its feet,” stated Stanley Baldwin, the Tory Prime Minister. It was this that provoked the General Strike of 1926.

Whoever wins the election – and however strong their reforming zeal – the next government will be remembered as a cutter,” explains the editorial in the ‘Financial Times’ (19/8/09). “No reforms can save the British state from its coming re-sculpting.”

The Tories are preparing for power. They will be the faithful government of finance capital, ready to do its bidding. Cameron has already stated he wishes to model his government on Tesco and J. Sainsbury, the supermarket conglomerates. Britain would then truly have a government of millionaire shopkeepers, a suitable epitaph to its ignominious decline. However, they are already sharpening the knives for the massive cull of public services in this “age of austerity.”

“There is a wing of Conservative thinking that has never gone away but which has been suppressed by the Blairite-Cameron view of the world. The public spending crunch will give them wind in their sails and give them the opportunity to be more radical”, said Tony Travers, expert in London governance at the London School of Economics (LSE). By “more radical”, read “more counter-revolutionary.”

The National Institute for Economic and Social Research in response to the crisis has called for the government to raise the pension age to 70.

The alternative to a pension-age rise, it said, was a combination of extreme measures such as freezing public sector pay for five years, the loss of about 120,000 government jobs each year for the next five years, a 7p increase in basic tax rates and an expansion of the value added tax base to everything but food and children’s clothing.

Even making two of these painful choices, said Mr Barrell of the NIESR, would not bring public spending back to a sustainable level. Clearly an even more vicious programme of attacks will be needed.

No Alternative but to Fight

The outlook for the working class is extremely bleak on the basis of capitalism. Half of all workers have already faced cuts in pay or hours of work during the recession. They were told that this was a necessary temporary sacrifice to save their jobs. This, however, is the lull before the storm with fears of a double-dip recession ahead.

Brendan Barber, general secretary of the TUC, warned that cuts could push the economy into such a recession and drive up unemployment. “The last time we suffered slash and burn economics,” he warned, “we had riots on the streets here in Liverpool.” Nevertheless, this warning will fall on deaf ears. The ruling class is not moved by such considerations, only by material class interests, namely, urgent measures that will rescue capitalism and restore its profitability. The capitalists are preparing a showdown with the working class, as Baldwin did in 1926. That is the meaning of the Geddes’ lessons.

The working class will have no alternative but to fight, as their forefathers did. They will come to realise that in the harsh school of Cameron there is no solution to their problems under capitalism. However, the struggle to defeat the Tories, if they manage to gain power, must go hand in hand with the transformation of the labour and trade union movement. The present right wing in the Labour Party – who will be blamed for the defeat - will be spewed out. The task will be to forge a party that will not capitulate to big business, but will carry through the socialist transformation of society. Only in this way can the ills of capitalist crisis – unemployment, cuts, homelessness and poverty - be eliminated forever. The only choice facing working class today is, in the words of Rosa Luxemburg, “Socialism or Barbarism.”