In New Zealand there is a phrase that is commonly used in all walks of life: "She'll be right".  Until recently the term generally had positive connotations, reflecting our laid back attitude to life.  In more recent times the term has become increasingly negative as it often refers to a complacent attitude that leads to poor decision making, often of a financial nature.

While the phrase may be unique to New Zealand the mindset behind it is not.  In businesses, government agencies and capitalist societies as a whole the "She'll be right" mindset can be found.  This attitude has often been the reason why so many survivable incidents have turned to tragedies that have claimed the lives of many people.

The Titanic, the Grenfell Tower and the levees of New Orleans were all engineering marvels of their time but all three of these marvels were undermined by the "She'll be right" attitude both in their construction and the way in which decisions relating to them were made.  When these marvels of engineering were put to the test they failed - with deadly consequences.

When the Titanic docked at the port in Southampton it made such an impression that some trade publications were calling her practically unsinkable.  It was the largest ship afloat at the time, it had some of the most advanced safety features on board and the passengers - even in steerage - enjoyed a level of comfort far superior to that available on most ships at the time.  There was only one problem.

When it came to lifeboats only the minimum number of lifeboats required by British maritime law were provided.  That is, only twenty lifeboats.

Even if every lifeboat was filled to capacity only 117 people would’ve been able to get on board yet the Titanic was carrying 2224 passengers and crew.  It’s true there were enough life jackets and life vests for every person on board but they would prove to be useless.  Many, if not most, of the people who died when the Titanic struck an iceberg and sank froze to death in the icy cold waters of the Atlantic Ocean rather than drowned.

What is truly shocking is the “She’ll be right” attitude adopted by the White Star Line (the owners of the Titanic resulted in the reduction of the number of lifeboats from thirty-two to twenty so that the passengers didn’t have to put up with a “cluttered deck”!  (The Titanic: Lifeboats, www.historyonthenet.com)

One would’ve hoped this “She’ll be right” mindset would’ve sunk with the Titanic but it would rear its ugly head again in the Grenfell Tower fire in London in 2017.

The Grenfell Tower was an ugly concrete and glass structure built in 1974.  It was an example of the Brutalist style of architecture that was popular at the time.  Because of its reinforced concrete construction, only the absolute minimum of safety features was installed.  Other safety features, such as water sprinklers, were fitted later retrospectively.  These safety features would prove to be useless when the fire that claimed seventy-two lives broke out.

Because the Tower was built in one of the wealthiest areas of London there was always pressure placed upon the council to do something to improve its appearance.  After many years the Royal Kensington and Chelsea Borough Council began to improve the outward appearance of the building by putting up cladding.  The problem was the company that had won the cladding contract - Arconic - had a product that had been linked to high rise building fires in the United Arab Emirates.  The only reason why Arconic won the contract was that their cladding was cheaper than that of their nearest bidder whose product was fireproof.  To save several thousand pounds the Council allowed the Tower to be converted to a death trap. 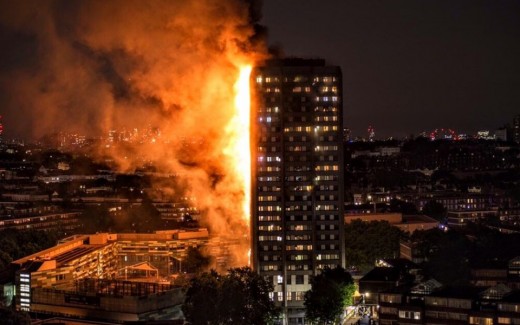 The fire broke out in one of the tower floors in one of the fourth-floor apartments.  It was the result of an electrical fault that caused an electrical fault.  If the cladding had not been installed the fire would’ve almost certainly been confined to the apartment concerned.  However, the moment flames came into contact with the cladding the fire raced up the side of the building.  As the fire drills had assumed any fire would be contained within one or two apartments most people had no idea what to do when they were confronted by flames coming from outside the building.  The speed of the fire also made it impossible for many of the residents to get out of the building in time.  (BBC, Grenfell Tower Inquiry: Cladding firm “knew of fire risk”, February 20th, 2021 and BBC, “How the tragedy unfolded at Grenfell Tower”, May 18th, 2018 and others.)

During the inquiry (which is still on-going at the time of writing) it was highlighted how the obsession with saving money saw regular replacing of contractors and project managers.  This led to contractors who answered to no one except their own bosses.  This led to many problems both during and after the refurbishment - and it has also made it difficult to determine who is ultimately at fault for causing those seventy-two deaths.

In contrast to the sinking of the Titanic and the Grenfell Tower fire, the failure of the levees in New Orleans during Hurricane Katrina was the product of both nature and the “She’ll be right” attitude.

In the case of the sinking of the Titanic the ship had sunk after striking an iceberg while travelling at high speed in an area known to have icebergs at that time of year (April 1912).  In the case of the Grenfell Tower fire, an electrical fault triggered the fatal fire.  The electrical fault was caused by years of poor maintenance by the building’s managers.  Both were the result of poor decision making.  In contrast, the collapse of the levees of New Orleans was the result of a Category Three hurricane.  However, nature had little to do with why the levees failed.  As that sounds contradictory, an explanation needs to be provided.

According to the article “The Broken Promise of the Levees that Failed New Orleans”,  which was published in the Smithsonian magazine in September 2015, the levees were constructed out of “a lot of poured concrete, on swishy sand and poor soil; that wasn’t properly maintained”.  Because the levees were constructed out of substandard concrete, used soil that was prone to becoming heavily saturated and had the calculations used for constructing the levees based upon the most conservative interpretation of the data the levees weren’t capable of doing what they had been designed to do.

While it is true that the storm surge created by Hurricane Katrina simply swept over the levees in some places the vast majority of the fatalities in New Orleans occurred with the breaching of the levees in several places, in particular the 17th Street Canal.  These breaches should not have come as a total surprise to the authorities because, for over a year before Hurricane Katrina, people in the area had been complaining about their front yards being flooded because of seepages along the levees in the area.  These concerns had not been acted upon.  Perhaps if these concerns were listened to, the weaknesses of the levees may have been detected and measures undertaken to strengthen them.  That failure to act killed nearly seven hundred people in New Orleans, the majority of whom were black working-class people.

It is foolish to claim that a Socialist society would eliminate the “She’ll be right” mindset that had such tragic consequences in the Titanic, the Grenfell Tower and Hurricane Katrina disasters.  The fire and explosion at the Chernobyl nuclear power plant in the (then) Union of Soviet Socialist Republics in 1986 proved that.  However, unlike Socialism, the “She’ll be right” mindset is able to flourish within Capitalism because the foundation stone of Capitalism is the profit motive.

The profit motive often leads to appallingly bad decision making such as reducing the number of lifeboats on an ocean liner, contracting out the installation of cladding on a building to a contractor offering the cheapest rather than the safest product and the designing and construction of essential infrastructure like levees on the basis of the most conservative data available and with the shoddiest materials available.

It is worth mentioning that the loss of lives caused by the sinking of the Titanic and the Grenfell Tower fire could’ve been prevented.  However, in the case of Hurricane Katrina, lives still would’ve been lost for there were many factors that caused the deaths of so many people in that tragedy.  Yet, the death toll in Hurricane Katrina would’ve almost certainly been much lower if the levees had been better constructed using higher quality building materials and if they had been properly maintained.

Disasters don’t happen in isolation.  They happen because of decisions that took place a few years earlier (as in the case of the Titanic) or because of decisions made decades earlier (as in the cases of the Grenfell Tower fire and the failure of the levees during Hurricane Katrina).  They are made worse by decisions influenced by cheap-skate penny-pinching and complacency about how (supposedly) indestructible a marvel of engineering or construction is.

Poor decision making, cheap-skate penny-pinching and complacency are all hallmarks of the “She’ll be right” mentality that flourishes within Capitalism.  Creating a Socialist society won’t eliminate disasters or the “She’ll be right” mindset entirely but it will eliminate the profit motive and the cheap-skate penny-pinching that so often leads to disasters.  Eliminating the profit motive will prevent many, if not most, disasters from happening and reduce the impact of those disasters that can’t be prevented.