Today (October 19th), the first day of the 48-hour general strike in Greece was sensational. Apart from the government and public utilities workers that participated in the strike massively, hundreds of thousands of workers from the private sector came out on strike for the first time, and also joining the millions of striking workers were tens of thousands of small businesspeople and shopkeepers who closed the shutters to their shops in solidarity. 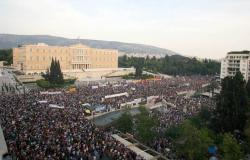 Syntagma square Photo: odysseasgrAbout half a million protesters flooded the streets of Athens in one of the biggest strike movements in modern Greek history. Tens of thousands also participated in demonstrations in an unprecedented wave of protests and strike action in the provinces, with 50,000 in Thessaloniki, over 20,000 in Patras and Heraklion in Crete and several other cities that had never seen such huge numbers on the streets. 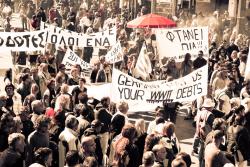 Athens general strike Photo: odysseasgrThis magnificent general strike marks an acceleration of the movement of Greek society towards a revolutionary situation. The working class, having paralysed the state and the economy, have become conscious of the immense power they have and seem determined to make any sacrifice necessary and fight to the end. Of extreme significance is also the fact that the working class is now openly backed by the middle classes, who have come to realise that only the workers can provide the necessary power and leadership in this key battle.

Photo: odysseasgrOn the other hand, we see the ruling class in a state of political deadlock and confusion, regardless of the outcome of the vote in parliament on the new austerity measures. This situation has become abundantly clear after the failure of the recent talks between Papandreou, leader of PASOK, and Samaras, leader of the conservative New Democracy. What is visible is the stress and panic that the stormy mass movement of the workers has provoked among these political leaders. Instead of presenting an image of “cooperation” in the face of the crisis, what seemed to dominate the meeting of these leaders was a state of embarrassment and the desire to blame each other for the mess. 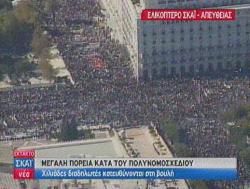 The one thing that is missing to transform this massive wave of protest into a victorious revolutionary movement is a decisive revolutionary leadership. Unfortunately, the leaders of the trade unions and the parties of the Left are lagging behind the movement, confused and well below the needs of the moment. They refuse to support and organise an escalation of the struggle with a general all-out, long lasting, political strike, even now after this earth-shattering general strike which has radically changed the situation and which has brought to the surface a mass mood of determination to struggle, and while workers in one sector after another have already organised political strikes. 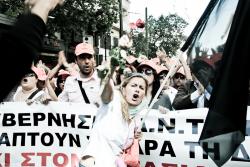 Photo: odysseasgrWe, the comrades in Synaspismos and the Synaspismos Youth gathered around the journals “Marxistiki Foni” and “Revolution”, believe that the natural and necessary next step after this powerful 48-hour general strike is to move on to an all-out general political strike, organised by the trade unions, together with the election of strike committees in every workplace and the setting up of picket, defence squads, strike funds, soup kitchens and also the election of a nationwide central strike committee with representatives from the union confederations and federations, from the strike committees and from those workplaces where there is no organised trade union structure. 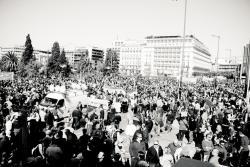 Photo: odysseasgrThe goal should be the immediate removal of this government, and the Troika that is behind it, and the election of a government committed to carrying out the demands of the labour movement, cancelling the predatory debt and establishing a socialist, democratically planned economy, and putting an end to this rotten capitalist system and setting in motion the socialist transformation of society as a step towards the victory of socialism in Europe and worldwide.

On the basis of this plan of action to escalate the level of the labour movement’s struggle, and with this political objective in mind, here and now, the KKE (Communist Party), SYRIZA [the electoral front centred on Synaspismos], and the mass forces of PASKE that are participating in the struggle, and who are against the leadership of PASOK, should establish a united front.

Everyone in the struggle until victory!
For an all-out general political strike!
For a government of the Left with a socialist programme!