On Thursday in Athens during the mass workers' protests we saw the state collaborating with hooligans and provocateurs against the labour movement. What is now required is a political general strike! Here we publish a statement by the Greek Marxists of Marxistiki Foni. 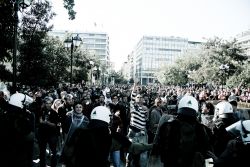 Protesters confronting police. Photo: odysseasgrToday's [Thursday, October 20th] second day of the great 48-hour general strike, was marked by the first death, a 53-year old militant building worker, Dimitris Kotsaridis. He died as a result of a police operation, during which tear gas was used against the demonstrators, which is common practice for Greek police. All this happened in the background of the implementation of an insidious plan of repression of the strike rally, which the police cooperated with hooligans and provocateurs.

>The plan was implemented in order to overshadow the fact that today in the general strike the turn-out was even bigger than yesterday and in order to break up the demo in Syntagma square, in which for the second consecutive day, hundreds of thousands of militant strikers rallied and for the first time after a long period there was united action of the entire labour movement.

The main target of this plan of repression was no accident. It was PAME [the Communist Party's faction inside the trade unions]. To anyone who participated in today's demo, it was clear that the organised and strong presence of PAME around the Parliament – of course in conjunction with the massive, organised presence of dozens of unions – was a key factor in delaying the use of stone throwing provocateurs with the tacit collaboration of the riot police, which is then usually used as an excuse by the police to disperse demonstrations in clouds of chemical gas.

The brains behind the forces of state repression understood that the PAME stewards had to be removed if Syntagma Square was going to be cleared of the angry protesters. Therefore, the police put in place their tried and tested method of using hooligans and provocateurs against the forces of PAME. 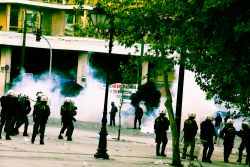 Tear gas against protesters. Photo: odysseasgrUnfortunately, the passive response of the leadership of the labour movement and the Left, and particularly the leadership of the Communist Party, to the tragic events has to be criticised. Its reaction so far to the murder of a PAME militant fighter, has been lukewarm, to say the least. The moderate stance of these leaders has been praised for its sense of "political responsibility" both by the government and other representatives of the ruling class, such as A. Georgiadis (a right-wing LAOS MP).

In contrast to this passive attitude of the Left and labour leaders, the objective situation has become very critical. The labour movement today mourns the first death in the battle against the government and the Troika. The only way to honour the memory of this militant is through the continuation and escalation of the strike movement, for the sake of which he was sacrificed.

The bloody methods of suppression that lead to the death of a militant, but also to dozens of other wounded protesters, is another symptom of the political impasse and panic on the part of the government and the ruling class, in the face of such a mighty strike movement. We have to understand that although the new bill is expected to go through parliament, we have "cornered them", and now is the time to escalate the struggle decisively in order to finish with them!

The attempt to make the working class pay for the crisis and the condemning of a large number of workers to a permanent state of misery and mass unemployment, in order to protect the superprofits of the international usurers – the creditors of the state – and to save big business from the deep capitalist crisis, will continue inexorably as is eloquently demonstrated by the report of the Troika published today, in which it calls for new austerity measures to the tune of €8 billion. At the same time, the conflicts among the “strong” eurozone states, who are being called on to pay higher costs for a controlled bankruptcy of Greece, but also among the other highly indebted countries who will inevitably follow, are intensifying more and more, bringing closer the prospect even of an uncontrolled bankruptcy and an exit of Greece from the eurozone.

The prospects of an impending deep recession in the country and the movement towards a new slump at the international level, underlines the need for the labour movement to pursue the struggle more vigorously. The 48-hour general strike that ended today should be the first step in the preparation of an all-out political general political, prepared by the unions and strike committees in every workplace, with the aim of removing this government and the Troika and the election of a government which will carry out the demands of the labour movement, cancelling the predatory debt and establishing a socialist, democratically planned economy.

On the basis of such a militant programme and objectives, the KKE, SYRIZA and the mass forces of PASKE involved in the struggle who repudiate the leadership of PASOK and the government, should set up a united front.