The final results of the December 6 National Assembly elections in Venezuela have now been announced. The opposition MUD received 7.7 million votes (53%) for the Bolivarian parties 5.6 million (40%). Due to the way the Venezuelan electoral system works this has guaranteed the opposition a two thirds majority in the new parliament where they have 109 deputies as well as 3 indigenous representation deputies which also went to the opposition.

On the night of the election the representatives of the reactionary opposition started to announce the measures they would implement. These included the rollback of all the key laws passed by the Bolivarian movement in power. The different bosses organisations (Fedecamaras, Consecomercio, Fedenaga), feeling that they were now back in the saddle, demanded the repeal or “reform” of the Law on Fair Prices, the Labour Law (in order “to make it more business friendly”) and the Health and Safety at Work law. The landowners demanded the repeal of the Land Law (passed by Chavez in 2001) and the devolution of all expropriated latifundia. An opposition deputy for Carabobo announced they would privatise all expropriated factories. The opposition mayor of Baruta stated that they would privatise the Caracas water supply company Hidrocapital, as well as the electricity company Corpoelec.

Ramos Allup, the leader of one of the traditional parties of the oligarchy (AD), set the tone by attacking the National Assembly TV, threatening its very existence, and announcing a constitutional coup against the president. “This government will not finish its term” were his words. He also announced a freeze on the level of pensions and a freeze on the number of pensioners. Furthermore, the opposition has already announced a purge of all the state institutions, including the National Electoral Council, the Supreme Court of Justice, etc. The ruling class feels confident and are going onto the offensive to recover all the levers of state power they had lost control of over the last 10 or 15 years.

To add insult to injury, the executive secretary of the opposition MUD, Chuo Torrealba, threatened to remove Chavez’s remains from the Cuartel de la Montaña in the 23 de Enero parish.

All of this has provoked great uneasiness amongst the Bolivarian masses who at the same time are discussing the reasons for the defeat. It is clear that even a layer of people who voted for the opposition are now opening their eyes to what the rule of the right wing will really entail.

Even within the opposition itself there are serious splits about the way forward, particularly between the “moderate” wing, represented by Capriles, and the “insurrectionary” wing, represented at the moment by people like Ramos Allup and Chuo Torrealba. Behind Allup and Torrealba stand Maria Corina Machado and Leopoldo Lopez. In a typical fashion they are already at each others’ throats fighting for the loot.

After the initial shock of the defeat, Bolivarian activists in the neighbourhoods and in the workplaces have started to react. Comrades report that there are meetings being organised everywhere, in a semi-spontaneous fashion, to discuss the reasons for the defeat but also to organise the resistance against the counter-revolutionary assault.

A comrade who works for Movilnet, the cellular telephony operator owned by state-owned CANTV (renationalised by Chavez in 2007), reports that there is great ferment amongst the workers. They fear (for good reason) political reprisals and even privatisation. They are getting organised and have established a skeleton of workers’ committees in each department of the company. “There is a very militant mood. The people are mobilising and getting organised at a very high level. There are meetings taking place in the streets and in the workplaces. In Movilnet yesterday we set up 14 cells which will became the organised structure of the workers". Similar meetings are taking place in government institutions, ministries and state-owned companies.

Workers at the National Assembly TV started to mobilise against the threats of the opposition and received solidarity from workers at other state-owned media outlets (Vive, AlbaCiudad, VTV, etc) who also fear a political vendetta. President Maduro took the step of handing over the broadcasting licence to the workers themselves, so that the National Assembly TV will now be under workers’ management and out of bounds for the new National Assembly majority. In the same vein, president Maduro has announced the transfer of ownership of the Cuartel de la Montaña to a Foundation, “so that it belongs to the people and can’t be touched”. These measures have been welcomed by activists, though some are saying that had similar measures been taken before, then they wouldn’t have been defeated!

Workers at nationalised paper factory Invepal, the first company to be expropriated by Chavez back in 2004, have already rejected any threats of privatisation and announced they will defend themselves.

On Wednesday the 9th of December, the social movements in Caracas called for an open meeting outside the National Assembly that they described as a Parliament in the Streets. Hundreds of activists representing many organisations attended the meeting and took turns to speak to analyse the reasons for the defeat and what to do next. 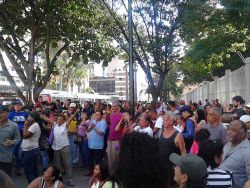 Comrades from Lucha de Clases, the Venezuelan section of the IMT, report the general thread running through all these interventions were: "1) the masses are not to blame for the defeat, 2) corruption and lack of efficiency of the government and institutions is to blame, 3) they are asking that Maduro should sit down to discuss with the rank and file, not with the right wing nor the capitalists, 4) there's talk of expropriation and nationalisation and 5) heads of ministers and vice-ministers should roll" 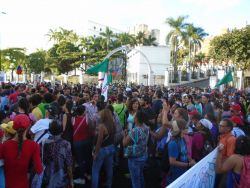 Another comrade made some very interesting observations about the mood of those present at the Caracas assembly: “It is worth noting that this mobilisation was not organised by the bureaucracy, no free food or drinks were handed out, no one was expecting to be given a Canaima tablet, this is the real chavismo, the rank and file one, sick and tired of reformism, bureaucracy and corruption. We demanded the deepening of the revolution. As more and more people kept coming, we recognised our strength and the mood become one of joy. Carmona's and the IMF's dogs should be aware that the people will be in the streets defending its rights and conquests. The mood is increasingly revolutionary, the youth is fighting for a space within the party."

The assembly then marched all the way to the presidential Miraflores Palace. When they arrived, soldiers guarding the Palacio Blanco (opposite Miraflores) came out of the fences and greeted them. They also listened attentively to the speeches. Some of the soldiers went to the roof of the palace and greeted the assembly by waving a huge Venezuelan flag. This was a very significant gesture as everyone present was aware that it repeated what had happened after the defeat of the coup in April 2002. It was a powerful symbol of the unity between the revolutionary people and the ranks of the Bolivarian army.

It is worth noting that the anger of the masses was not only directed at ministers and vice-ministers. There was also criticism of the recall PSUV congress which has been called for December the 10th and 11th. Speakers pointed out that, in fact, the delegates, which are those of the previous congress,  should all resign as they too are responsible for the defeat. Let us remember that a large part of that congress was made up of local mayors, regional governors, etc. Those at the assembly questioned the fact that the congress was going to take place at the Alba Hotel. “Why are they not meeting in the streets, with us, with the PSUV rank and file members” said one of the participants in the assembly.

Some have argued that the Bolivarian revolution should now make an offer to the opposition of a “serious deal” on issues which “affect the majority of Venezuelans”. This has been the line put forward for instance by former presidential advisor JC Monedero, but also by former ministers like Victor Alvarez.

Not only are these people are out of touch with the mood of the masses but, as a matter of fact, their program is completely utopian. The reactionary MUD wants no compromise. What they want, as they have made clear, is to roll back all the conquests of the revolution. As a matter of fact, it is precisely this policy of appeals to the “good will” of the ruling class which led to the electoral defeat.

If, as it seems, the counter-revolution goes on an all out offensive against the conquests of the Bolivarian movement, then there will be a counter-reaction.

The main tasks of the revolutionary movement should now be:

1) To make a sharp balance sheet of the reasons for the defeat. The masses of the people are not to blame. Bureaucracy, corruption and reformism are responsible.

2) The revolutionary movement should re-arm itself with a clear revolutionary program of expropriating the oligarchy and planning of the economy under the democratic control of working people in order to solve the pressing economic difficulties facing the masses.

3) All conquests of the revolution should be defended at all levels.

The Venezuelan revolutionary masses have not yet said the last word.