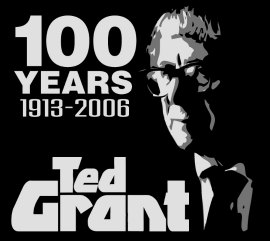 Today, 9th July, marks the 100th anniversary of the birth of Ted Grant, the founder of the International Marxist Tendency. Rob Sewell, editor of the British Marxist paper Socialist Appeal, outlines the important role played by Ted in building the forces of Marxism during his lifetime and discusses the legacy of Ted for Marxists today.

For those who knew him, Ted Grant was a political giant. He lived and breathed the ideas of Marxism and was, without doubt, the most important Marxist theoretician since the death of Trotsky. This can be gauged by the depth of his writings over some 70 years of political activity, most of which is available at tedgrant.org.

Morsi has fallen. The magnificent movement of the masses has once more shown to the entire world the authentic face of the Egyptian people. It shows that the Revolution, which many even on the Left believed to have stalled, still possesses immense social reserves.

The cat-and-mouse game between piracy supporters on the one hand and state authorities and major multinational companies on the other is heating up. The recent spate of persecution of websites and individuals involved in piracy opens up a new phase.

Read more: The War Against Online Piracy - Part 2: The...

The recent announcement from Labour and the Greens with regard to setting up a single national buyer for wholesale electricity to curb the excessive profits of the power generators, (who by the end of the current round of partial-privatisations will overwhelmingly be in the private sector), was certainly a shot across the bows of the National led government.

Read more: Power to the people?

Read more: Down with Erdogan and his government of thieves!...

What started as a small scale protest against the destruction of Gezi Park that stands next to Taksim Square in Istanbul has now developed into a nationwide movement demanding the resignation of Prime Minister Erdogan, of the AK Party.

The cat-and-mouse game between piracy supporters on the one hand and state authorities and major multinational companies on the other is heating up. Over the past few years there has been a marked increase in the persecution of websites and individuals involved in piracy. Democratic rights are being thrown overboard and the full force of the state applied in the media industry’s ruthless pursuit of profits.

Read more: The War Against Online Piracy - Part 1: The full...

On April 17th, 2013, marriage between persons of the same gender became lawful in New Zealand after parliament voted 77 to 44 in favour of the passing of the Marriage (Definition of Marriage) Amendment Act.  This law passed with widespread support from the New Zealand public with most opinion polls showing up to 70% of those polled supporting same sex marriage.

This makes New Zealand the 13th country to legalise same sex marriage and the first country in the Asia-Pacific region to do so.

Read more: The definition of marriage

Since the death of Margaret Thatcher last week the British Establishment have been revelling in their past. In a similar manner to the death of Princess Diana, the Royal Wedding and the London Olympics, they believe that this event could serve as another circus to distract working class people from their problems. We would all come together as one nation and forget our class differences. This has been a serious miscalculation.

Read more: Thatcher is dead - the struggle against...

The Westpac television advert showing the house-sharing pensioners arguing about their food and chores may not be so funny in a few years' time. The Government has concluded that it can no longer afford a decent standard of living for pensioners. The problem is that there will be too many of them – as people are living longer and into the bargain, there is the baby boom.