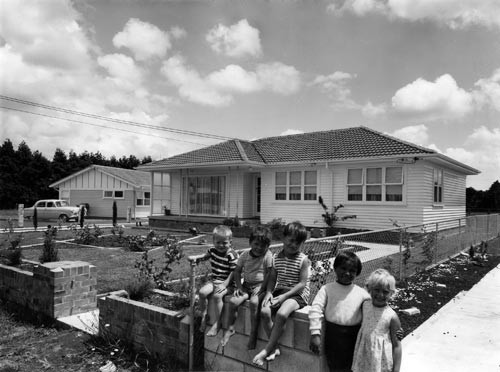 Prior to the European settlement of New Zealand, most Maori lived in small villages where the very notion of ownership was unheard of.  Housing was usually allocated according to the position held by a person, or more commonly, a family within the community.  The houses were usually made of whatever materials were available, especially raupo.  They were also quite small because most of the activities undertaken within the villages were done outside or in communal buildings such as the marae (meeting house).

The earliest European inhabitants were whalers, ship repairers and missionaries who generally lived in small stone or wooden cottages that were constructed from the same materials used by the local Maori.  By about the 1840s pre-fabricated housing was being brought in from Australia.

Earthquakes in 1848 and 1855 in the Wellington region made builders reluctant to use bricks and masonry for building materials.  Instead, strong timber from native trees, especially rimu and kauri, became the most common building materials.  This, combined with readily available land, meant that most housing tended to be single or double-storey dwellings.  By the outbreak of the First World War the Californian bungalow had become the most common building type in New Zealand.

Apart from certain inner-city areas or areas with steep terrain (such as Wellington city), the vast majority of homes were privately owned single storey stand-alone dwellings on their own sections.  Many of these private homes were not owned by those who lived in them.  In mining towns like Denniston on the West Coast of the South Island and railway towns like Cross Creek on the Rimutaka (now Remutaka) railway incline in the lower North Island, the homes were owned by companies.   In other places, the homes were owned by landlords and property speculators.  And, of course, slum lords.

Charities and local councils sometimes provided cheap housing for old age pensioners and certain groups in need of help but, until the 1930s, anyone who was unfortunate enough to end up sick, unemployed or otherwise unable to afford the rents being charged found themselves living in slums.   Discrimination against non-Europeans when it came to trying to buy or rent property also resulted in many people reduced to living in housing that was often little more than wooden and corrugated iron shacks.   Until the Depression, in the 1930s this poverty was mostly confined to a few inner-city areas or in rural areas where it was largely out of sight and out of mind.

During the Depression, many companies went bankrupt while others dismissed some, if not most, of their workforce.  Those employers who did keep their workers slashed their wages.  Public servants faced pay cuts of 20% or more with the result that many people began to default on their mortgages or rents and were evicted.  Slums began to expand and so did extreme poverty, malnutrition, diseases, social unrest and political militancy.  For young unemployed men, their already dire situation became worse as they were sent to work camps in remote areas to do heavy labour such as road construction and were forced to live in work camps where the accommodation was often nothing more than tents.

Traditionally, charities were able to step in and help if people fell on hard times but the demands placed upon the charities by the Depression proved too much for them.  Not only were the numbers of people needing help too great to cope with but they couldn't raise the money they needed to provide help.

Many of the more liberal clergy, such as the much-beloved “Uncle Scrim", were so shocked by what they saw they began to support the Labour Party and its policy of building state housing.  There is no doubt that Labour's state housing policy was a key factor in their election victory in 1935.

The first state house didn't become available for rent until 1938 and the image of Michael J Savage – the first Labour Prime Minister of New Zealand – helping to move the furniture of the first state tenant into their state home remained a lasting image for generations of Labour supporters.  The house is nothing spectacular to look at: it's a plain-looking timber house with plenty of sun sitting on a quarter acre section in Miramar, Wellington.  Yet this house would be the prototype of thousands of state houses.

During the Second World War state housing construction took a back seat as resources were diverted to fight the war against fascist aggression but, once the war had ended, the government resumed its state housing building programme.  It was motivated, in part, out of honouring its pledge to look after returning servicemen but also by the need to provide employment for them.  Whole suburbs of state houses were constructed and assistance, such as cheap housing loans and rent to buy agreements, were introduced to make homeownership as affordable as possible.

In eastern Porirua, Lower Hutt, Wainuiomata and south Auckland (to name but a few places) state housing areas grew rapidly.  However, the growth of these areas wasn't fast enough to cope with two major demographic changes.  The first was the rural to urban drift of (mostly) Maori workers who'd lost their jobs on the farms thanks to growing mechanisation and the second was the arrival of Pacific Islanders to work as cheap labour in the factories and on the farms.

Maori and Pacific Island workers moving to the new state housing areas underwent a major culture shock as they found themselves in an environment where there was no sense of community and where there was little use – or value – attached to their languages, cultures and traditions.  This, combined with their struggle to find work due to racial discrimination and language barriers (in the case of Pacific Islanders), led to many social problems of which alcoholism, crime and gangs were among the more prominent features.

It was from about the early 1950s that state housing areas began to get a bad reputation among the bourgeoisie, especially when it came to young people.  My father was one of those “juvenile delinquents" of “questionable moral character" who were the subject of the Mazengarb Report: a government inquiry into juvenile delinquency in Lower Hutt launched in the 1950s.  (https://en.m.wikipedia.org/wiki/Mazengarb_Report)

Not only did social attitudes towards state housing and those who lived in state housing change from about that time but the type of state housing that was being built.  The stand-alone single-story house on a quarter-acre section was giving way to terrace housing and semi-detached two-unit dwellings.  The quality of the materials was declining as the emphasis switched from quality to building as many cheap state housing units as possible.  The switch to poorer quality building materials led to problems like leaking roofs and pipes, mildew on the ceilings and walls, and homes that were bitterly cold during winters and unbearably hot during summers.  This led to many health problems among state tenants, including children, who were getting illnesses like asthma, whooping cough and rheumatic fever that resulted from poor quality housing.  (https://www.rnz.co.nz/news/regional/291866/porirua-says-bad-housing-a-central-govt-problem)  Those who thought this was only a state housing problem were soon to find out that going for the cheapest building materials and builders to save money were about to find out the hard way that this could also happen with private housing.

The proliferation of state housing helped keep private rents down and dramatically increased the quality of private homes.  In many cases, the private homes were being built by the same companies being contracted to build state houses, such as Fletcher.  However, with deregulation of the housing and construction sectors, the watering down of building codes and the opening up of the housing market to foreign property speculators during the 1980s and 1990s would have devastating consequences.

In 1984 David Lange became the Prime Minister of New Zealand and his Labour government began to embark upon a radical programme of deregulating the economy, privatising local and central government services and amalgamating various local governments.  While this was promoted as a means of reducing debt and making both the economy and government departments more efficient and competitive the reality proved to be very different and this was reflected in what happened to housing.

Deregulating the construction industry opened the way for so-called cowboys to enter the construction industry.  Many of them were hired because they were cheap labour rather than trained to any reasonable standards.   According to the October 12th, 2016 Newshub article “The Causes of the Leaky Homes Crisis” was caused, in large part, by building code changes in 1995 that allowed untreated timber to be used in housing frames.  The use of cladding also contributed to leaking homes that effectively made them uninhabitable and worthless.  (https://www.newshub.co.nz/home/new-zealand/2016/10/the-causes-of-the-leaky-homes-crisis.html)

To make matters worse the amalgamation of local councils resulted in many people losing their jobs, including building inspectors.  This resulted in over-worked building inspectors being unwilling or unable to provide more than a cursory examination of buildings before signing them off as fit for the purpose for which they were built: a point that was highlighted in the Royal Commission of Inquiry into the collapse of the CTV building during the February 11th, 2011, Christchurch earthquake.

However, what proved to be just as toxic was the combination of the benefit cuts, the wage cuts that followed the introduction of the Employment Contracts Act in 1991 and the sale of state housing to property investors that were introduced by Jim Bolger's National Government that was elected in 1990.  Not only did these changes help create a housing shortage, especially for low-income people and the working classes, but they left many more people impoverished to the point they could no longer afford to pay their rent or mortgages and they ended up being evicted.  Some state tenants found themselves forced to pay market rental rates.

After the Christchurch earthquake in 2011, the National-led government used the earthquake as an excuse to evict state tenants and demolish the houses, as happened in Cannons Creek in Porirua and much of Lower Hutt, or to sell them, as happened in Titahi Bay.

Add to this mix the Resource Management Act 1991.  This Act was supposed to restrain urban sprawl and protect the environment.  Instead, the Act was used as a powerful weapon by bourgeoisie property owners to prevent the construction of housing for low-income people, usually by citing the impact on property values.  The costs of complying with resource consents made it uneconomic for construction firms to build housing for low ìncome and working-class people.  It also failed to prevent widespread environmental pollution and water contamination, especially in rural areas.  (https://www.stuff.co.nz/national/politics/opinion/122284651/the-end-of-the-resource-management-act-is-nigh)

From the 1990s onwards immigration policies were relaxed to encourage skilled workers to migrate here, especially ones whose skills and expertise was needed.  New immigration policies also allowed wealthy foreigners to invest in housing and various types of businesses in New Zealand.  This led to large scale purchasing of housing, particularly in Auckland.  Whole suburbs were built to meet the demand for housing that were created by these investors.  Some bought houses to rent them to affluent tenants but others bought houses to simply leave them empty until the value of the properties had doubled or even trebled before selling them in a practice referred to as land banking.

A ban on non-resident foreign ownership of existing housing stock (other than Singaporeans and Australians) was introduced by the Labour-led government in August 2018 (https://www.bbc.com/news/world-asia-45199034) but this did little to curb the rise of house prices and rent not only in major centres like Wellington and Auckland but also in areas traditionally shunned by most private property owners such as Porirua where the average rent is now $700 a week – the highest in New Zealand!