The Covid-19 virus most likely originated from the wet markets of Wuhan, China. It is certainly not a manufactured disease as proposed by former United States President Donald Trump – who claimed that it came from a Chinese lab - and it wasn't spread deliberately by American military personnel during the 2019 Kowari trilateral military exercises that were hosted by Australia and attended by the US and China in Northern Queensland as claimed by Chinese propagandists.

The wet markets are ideal places for the disease to jump the species barrier; the animals - whose immune systems are compromised due to stress and a poor diet - are kept in cramped cages, in high heat and humidity, in close proximity to many other species. There's no need to resort to conspiracy theories to explain the emergence of new zoonotic diseases in these conditions.

The outcome of the disease has varied from country to country. China, Taiwan, Korea and New Zealand have, so far, had the most success dealing with Covid-19. These places all share certain strategies that have helped achieve their relative success.

The best way to deal with the new pandemic has been enforcing “lockdowns”: closing non-essential businesses, using close contact tracing, encouraging people to work from home whenever possible and wearing masks when out and about. Frequent handwashing is one of the best ways to prevent infection. Some expect that a vaccine may soon be able to return life back to normal.

Other nations where the government has failed to act decisively have seen soaring infection rates. Just five countries: the USA, India, Brazil, Mexico and the UK account for half of all Covid deaths (https://www.bmj.com/content/372/bmj.n314). Together these places make up about 27 percent of the world population or 2,120,385,217 people out of a world population of 7,794,798,739 people in 2020. (https://www.worldometers.info/world-population/population-by-country/)

Social media has been a breeding ground for false claims. These include:

Perhaps it's understandable that people want to take concrete action to help themselves. Not everyone, however, is motivated by the desire to help. Some hucksters have tried peddling snake oil cures for a quick buck. Most notably a "miracle mineral solution" has been touted as a cure. 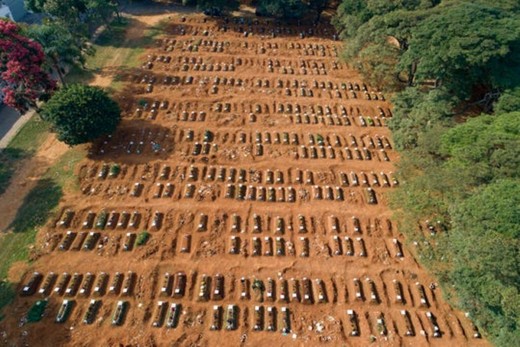 Seeking a profit at the expense of people's health is deplorable, especially at times when there is genuine fear and anxiety about Covid-19. What is even worse is that some political leaders are among the worst offenders. Trump has ill-advisedly told people that drinking disinfectant might help.

Another populist president, Jair Bolsonaro, who is sometimes known as Brazil's Trump, has pushed this sort of thing further by insisting his government recommend chloroquine as a cure for Covid. Although he himself was afflicted by the disease, it hasn't stopped him from deliberately misinforming his people. He is reported as saying that if he'd had chloroquine at the time he would have recovered quicker. (https://misinforeview.hks.harvard.edu/article/using-misinformation-as-a-political-weapon-covid-19-and-bolsonaro-in-brazil/)

Shockingly, he has admitted in private that the drug is simply a placebo. He has said that it's important to let workers feel a false sense of security by giving them some little pill that will encourage them to go back to work.

According to NPR, the ability of the Brazilians to address the challenges posed by Covid-19 have been hampered by how fragmented the health system in Brazil is. Brazil has a three-tier health system that works something like this: (a) there is one public health system that aims to be universal, (b) workers in the formal economy are covered by their work health insurance (with a high out of pocket excess) and (c) wealthier people use private hospitals.

In Brazil, 60% of ICU beds are in private hospitals that serve 25% of the population. The poorest people only speak to a doctor or pharmacist when they are ill and go to the chemist to buy medicine.

Brazil is not the only country in Latin America where Covid-19 has proven to be a difficult challenge. The reasons have been as much socio-economic as they have been political.

According to The Lancet, the Americas account for 48% of all Covid deaths. Crowded conditions, poverty, social discord, poor governance, fragmented and underfunded health systems have contributed to the disease's spread. Underlying health conditions like diabetes and obesity have made the virus more deadly. In Peru, 85% of deaths were in people who were either overweight or obese.

Some 54% of people in Latin America work in the informal economy. In Peru, this number may be as high as 70%. These people have no option but to continue working every day because they have no safety net of any sort. Lockdowns are ineffective in these conditions.

Quality of life, as measured by life expectancy, infant mortality rates and other statistics have improved as a whole but this progress is unequal within Latin American countries. Cuba and Venezuela have bucked this trend over the last ten years.

Putting profits ahead of people's wellbeing is the crux of the problem. The countries that have had the worst outcomes all have tried to put the so-called needs of the economy ahead of public health. This strategy has failed catastrophically. Attempting “soft” lockdowns, ones with a myriad of exceptions – such as classifying businesses like hairdressers and nail salons as essential - has exacerbated the effects of the pandemic in terms of both the economy and contagion/fatality rates.

In Latin America, Pfizer has been accused of "bullying" various countries through practices such as asking for cover against civil lawsuit indemnification and requesting collateral in the form of assets like embassy buildings overseas.

The lack of social distancing has made sure the “first wave” never really abates before being hit by the “second wave”, all the while the “third wave” looms.

Capitalism is directly responsible for the tragedy that is currently unfolding. The hunters and trappers that supply the wet markets in underdeveloped countries have been driven to eke out a living further and further into the bush, where countless new diseases lurk, because they have been denied opportunities elsewhere. Many of these hunters in China were at one point peasant farmers, smallholders who were unable to compete with large corporations practising industrialised farming.

The cramped, overcrowded conditions in these factory farms are the perfect breeding ground for disease. The industry's solution is the use of prophylactic antibiotics, which causes problems of its own – namely the rise of antibiotic-resistant pathogens. We can certainly expect more outbreaks of new zoonotic illnesses in the future.

Being the source of the problem hasn't stopped capitalism from profiting from the crisis. One way has been through stimulus packages that line the pockets of the ruling class.  The relief packages are espoused as a way to help out the poor but vast quantities of money go directly to corporations, ostensibly to ensure that they continue to pay their workers. In the United States the majority of these stimulus packages went to companies with multi-million dollar yearly profits, many took the payout while still laying off employees. The labouring classes have been left to feed off the table scraps of the rich, and what little money has reached them overwhelmingly went straight to landlords and banks as mortgage repayments.

As the only productive class in society, it will be the working class who will have the onerous task of repaying all this deficit spending through ever more drastic cuts to social services, through increased taxes on consumption and wages. Capital gains will probably go untouched, though.

Another way the ruling class has wound up benefitting from the pandemic has been the introduction of draconian measures which aim to control the population. Protests demanding social justice have been stifled in the Americas through the selective use of social distancing. Large gatherings of people have been banned effectively curtailing dissent.

The clearest example would be the waning strength of Chilean demonstrations against the Pinochet era constitution. The Piñera administration wasted no time in bringing in legislation that framed meeting in large groups as criminal, making them seem irresponsible for risking an increase in Covid-19 transmission. Black Lives Matter in the United States has been treated in a similar way.

In Spain lockdowns have been instituted on a neighbourhood by neighbourhood basis, heavily targetting working-class areas, where there are fewer jobs and fewer medical facilities. These people have been denied a way to seek better treatment. It is a way to instil fear in the population to control them more completely.

In summary, the tragedy has been aggravated by capitalism. It is unlikely, although possible, that the virus would have started without it. The ruling classes' measures and inaction have made the death toll far worse than would've been the case otherwise.

The current nationalistic fighting over who gets the vaccine first will also cause issues. For the vaccine to work it is important that it be rolled out as fast as possible over the entire globe – the pandemic is an international problem that knows no borders.

According to CNN, the Russian Sputnik V vaccine is making inroads in Latin America where the bourgeoisie fear Russian influence and prestige is increasing. Argentina, Bolivia, Mexico, Nicaragua, Paraguay, and Venezuela have approved its use. Colombia's soon to follow. Brazil, Chile, and Mexico (again) are going with the Chinese vaccine.

Health officials in these countries have stated that it's easier dealing with a government than a private company. Thus, even the bourgeoisie media and many Latin American health officials have conceded that the answer to addressing the Covid-19 pandemic has been to deal with governments rather than with corporations like Pfizer.

Phasing inoculation slowly, giving it to whoever can afford it first, will simply allow Covid-19 to mutate, rendering the solution useless.

Only a Socialist society, working along internationalist lines can organise an effective response to a true pandemic like this one. Make no mistake, there will be other pandemics in the future, which could very well be more virulent and more destructive. Greedy, grasping capitalist actions – like the ones we've witnessed lately - will doom us. Socialism is the only way forward for humanity.