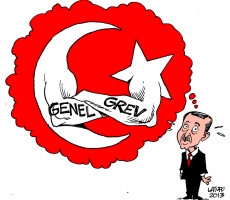 When the Occupy Gezi protesters were brutally attacked by the police on 28 May 2013 and the following days, the movement rapidly turned into a nationwide uprising against the corrupt and reactionary AKP government led by Recep Tayyip Erdogan.

The capitalist commentators are puzzled. Turkey has had very high rates of economic growth and was regarded as a model of stability. But this sudden explosion shows that beneath the surface there was a ferment of discontent.

The AKP government came to power in the general election of 2002 and has since increased its vote. Erdogan could remain in power because of Turkey’s economic growth in the last decade. But the poor people got little benefit from this growth. In a population of 75 million, the richest 20 percent account for over half the national income, while the poorest 20 percent have only 6 percent. 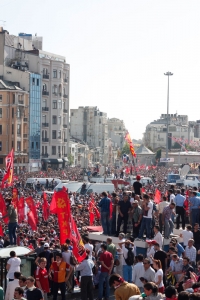 An unjust tax system puts all the burden of taxation on the workers and poor. Inequality has soared. Trade unions are repressed and rights trampled upon. A bottomless abyss has opened up between rich and poor, rulers and ruled. The events in Taksim Square were only the spark that ignited a powder keg that had been prepared for the last decade.

The rule of the AKP has been very repressive and anti-democratic. Erdogan is arrogant and autocratic. He has brought Turkey to the brink of war with Syria, which is very unpopular and inflicted Islamic rules that undermine the secular character of the state.

The growth of the economy was based on a massive influx of foreign direct investment, attracted by the privatization of public assets. But Turkey has accumulated a massive foreign debt and growth is now almost stationary and living standards are falling.

Despite the claim of Erdogan that the movement consists of “extremists”, it has a very broad character. Mass demonstrations all over the country have been joined by workers, students, pensioners, Kurds and Alevis, and even football fans from the rival Istanbul clubs Fenerbache, Besiktas and Galatasaray. The red flags of socialist and communist organizations can be seen next to portraits of Ataturk, and Kurdish fly alongside Turkish nationalist flags, which in the past would have been unthinkable.

At least two thousand have been arrested and at least 3 people have been killed, but brutal police repression has only poured petrol on the flames. The demonstrations have spread to at least a hundred towns and cities. The masses are fighting back against the police and in some cases forcing them back.

The protest movement has already scored a number of important victories. It forced the police to retreat, at least temporarily in some areas. It has forced the government into a corner. Erdogan’s violent threats of the first days have been replaced by conciliatory noises. These are more dangerous than the tear gas and truncheons of the police. No trust whatsoever must be placed in these false and hypocritical “conciliatoriness”.

All the offers of the government are lies, designed to divide and demobilise the movement. The government says it will not build a shopping mall in Taksim Square – only a mosque! This statement is a stupid provocation and an insult to the people of Istanbul.

The people of Turkey are tired of having their democratic rights trampled on by a clique that speaks in the name of Islam but whose real god is money, whose chief mosque is the stock exchange and whose high priests are greedy speculators. It is their interests that this government defends and nothing else.

The government now says it “respects the right to peaceful demonstration,” while the police, together with fascist thugs from the AKP, beat, gas and shoot defenceless men and women on the streets and thousands are arrested for the “crime” of demonstrating.

At this stage the main demands of the people are for democracy and social justice. But there can be no talk of democracy as long as the government remains in the hands of Erdogan and his gang. The first condition for a genuinely democratic Turkey is to sweep out the corrupt gangsters in Ankara. The main slogan must be: Down with Erdogan! Down with the government of thieves and oppressors!

The International Marxist Tendency (IMT) expresses its complete solidarity with the revolutionary workers and youth of Turkey who are fighting courageously for their rights. We call upon the Labour Movement everywhere to organise protests against the brutal police repression being organised by the Turkish government.

We agree that it is necessary to fight for every democratic demand. The working class desires the fullest democracy in order to prepare the ground for the struggle for socialism. But the revolutionary movement will necessarily go beyond the formal democratic demands.

The problems facing the people of Turkey cannot be solved by merely reshuffling ministers and governments. These problems are not just a question of parliaments, laws and constitutions but are rooted in the class nature of society itself.

How can there be any talk of justice when all the wealth created by the blood, sweat and tears of the Turkish workers is expropriated by a handful of thieves and parasites? There can never be social justice in Turkey as long as the land is in the hands of the landlords, the banks in the hands of the bankers and the industries in the hands of private capitalists.

Under Erdogan inequality has soared. The planned shopping mall in Taksim is seen as a symbol of the speculative urban development, the pushing out of working class people to the outskirts of the capital, the shoddy construction deals going to cronies of the ruling party and the glaring contradiction between rich and poor. It acted as a catalyst that has brought all the contradictions to the surface.

The present mass movement can bring the government to its knees. But in order to overthrow it, something more is needed than mass demonstrations on the streets. The most powerful force in society is the working class. Not a light bulb shines, not a telephone rings, and not a wheel turns without the permission of the working class!

The Turkish proletariat is very strong indeed, and it has wonderful revolutionary traditions. There have been some strikes, but what is necessary is to call an all-out general strike to unify the movement and provide it with a central goal. The trade unions should get together and agree on a date. Mass meetings should be called in every factory, office and workshop to discuss the issues and make plans.

In order to organise the powerful but dispersed forces of the revolution, action committees should be established in every factory, college, school, suburb and village. Draw in the broadest layers of the unorganised workers, peasants and youth, the women, the Kurds and other oppressed layers.

The establishment of democratic action committees at every level: local, district, regional and national, is the only guarantee that the initiative will remain in the hands of the revolutionary people and that the Turkish Revolution will not be hijacked as it was in Egypt.

The repercussions of the revolutionary movement in Turkey will be felt in both Europe and the Middle East. A mass movement against an Islamic conservative capitalist government in Turkey can only weaken the appeal of the Islamists in other countries and at the same time strengthen the revolutionary movement against the Islamic governments in Tunisia and Egypt.

The root causes of the Turkish insurrection are the same as those that sparked off the Revolutions in Egypt and Tunisia. They are an expression of the global crisis of the capitalist system, obscene wealth alongside terrible misery, homelessness, youth unemployment, and corrupt and dictatorial bourgeois governments, backed by US imperialism, who trample over the people’s rights in order to enrich their super-rich backers.

The workers of Greece, Cyprus and Turkey, the workers of Europe, Egypt and the whole world have the same problems and are fighting the same enemy. It is time to unite in one common international struggle of the working people against the dictatorship of Capital, which is the main barrier in the way of all human progress.

The courage and determination shown by ordinary people in Turkey has proved yet again that there is a power in society that is far stronger than any state, army, government or police force. That is the power of the masses, once they are mobilised to fight for a change in society, no force on earth can resist them.

The IMT stand shoulder to shoulder with the revolutionary people of Turkey: