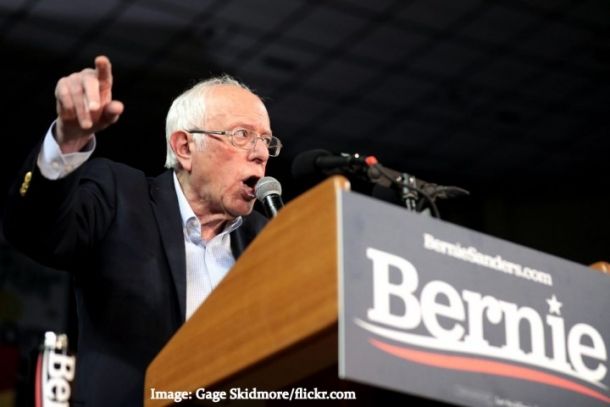 Big business rightly see this mood for socialism as a threat to their interests. And they know that appetite comes with eating. This is why Wall Street and their mouthpieces in the capitalist media have responded so hysterically to the prospect of a Sanders win. The ‘moderate’ candidates that the Democratic party establishment desire, on the other hand, have proved incapable of inspiring the party’s supporters, let alone the American masses. This is a reflection of the failure of the liberal centre ground, which had collapsed in one country after another in the wake of the 2008 slump. And this, in turn, is a cause for serious concern for the US ruling class.

The degeneration of the representatives of capitalism is apparent from the Democratic establishment’s first choice of candidate: the re-animated corpse of Joe Biden. The old-timer - who Trump has dubbed “sleepy Joe” - recently forgot what state he was in during an interview in New Hampshire. This is just one in a long line of political gaffes by the former Veep. And yet, this is the best the party establishment has to offer - a fitting candidate for the senile capitalist system that he ultimately defends. 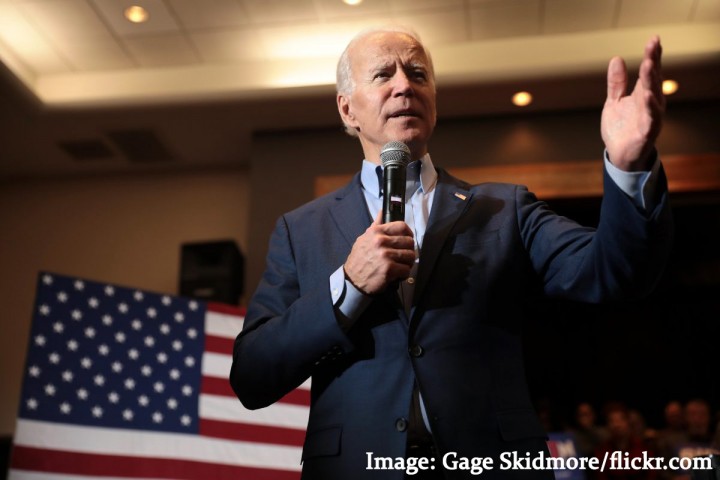 After a shaky start , Biden has regained his feet, to the delight of the Democratic grandees / Image: Flickr, Gage Skidmore

After making a shaky start to the campaign in the New Hampshire primary and the Iowa caucus, Biden has regained his feet, to the delight of the Democratic Party machine. After a victory in South Carolina, he made substantial gains on ‘Super Tuesday’, particularly in Southern states. With victories in Virginia and North Carolina, as well as a tight win over Sanders in Texas, Biden has cemented his position as the candidate of the Democratic establishment, who have swung firmly behind him.

Pete Buttigieg, who won early victories in Iowa and New Hampshire, pulled out after failing to make inroads in South Carolina. He has since backed Biden, as has fellow ‘moderate’ Amy Klobuchar.

Billionaire and former New York mayor Mike Bloomberg has also dropped out. This follows his poor performance on ‘Super Tuesday’, the scene for his highly anticipated entrance into the contest, which gave rise to only a single victory, in American Samoa. In many states he failed to win a single delegate.

Bloomberg’s demise came despite a $500 million investment in his campaign from his own personal funds. These drop-outs will strengthen Joe Biden’s campaign, giving him a clear run without any competition amongst ‘moderate’ voters.

Meanwhile, so-called ‘progressive’ candidate Elizabeth Warren has similarly failed to win support. She came in a meagre third place in her home state of Massachusetts, and also failed to register any delegates in a number of states.

The party apparatus contemplated keeping Warren in the race to undermine Bernie Sanders' campaign. But feeling confident in Joe Biden's chances, they opted to avoid risking any appearance of gerrymandering. Hence Warren pulled out of the race also.

This contest is therefore shaping up to be very similar to the 2016 primaries, where the whole Democratic establishment supported Hillary Clinton in order to hold back Sanders.

Role of the media

Fearing what a Sanders presidency would mean for the ruling class, the capitalist media has bombarded Sanders, with countless articles describing him as “unelectable”, a “disaster” and so forth.

There has been an attempt to paint Sanders as the “Trump of the left”. New York Times columnist Paul Krugman, for example, claimed Sanders’ attacks on Joe Biden’s social security record were based on lies of a “Trumpian” proportion. Froma Harrop of the Boston Herald, meanwhile, claimed that “the parallels between Trump and Sanders blaming liberal news sources for their setbacks are pretty glaring”, describing Sanders’ criticisms of media slander as “populist paranoia”.

While these attacks reflect the views of the American ruling class, they are unlikely to gain traction among the working class, who are sick of the rule of the elite and are desperately looking for a way out.

Taking inspiration from the success of the right-wing media’s assault on Corbyn in the UK, the establishment media have even attempted to label Bernie Sanders and the movement behind him as anti-Semitic, due to his opposition to the Israeli regime.

Sanders, however, has not capitulated to these accusations. He has continued to criticise the imperialist actions of the Israeli regime. For example, he recently refused to attend the American Israel Public Affairs Committee (AIPAC), after denouncing it as a “platform for leaders who express bigotry and oppose basic Palestinian rights”.

This is a lesson to the left in Britain. We must not give an inch to the establishment’s attacks. Instead, we must stand firmly behind our principles and go on the offensive. Weakness only invites aggression.

In bourgeois society, the mainstream media is owned by the billionaires, for the billionaires. It is a tool of the capitalist class to mislead and distort in order to maintain power. The attacks on Sanders have laid bare the reactionary role of the bosses’ media. Yet the more the media attacks Bernie and his ‘socialism’, the more it galvanises support for him and his policies amongst workers and youth.

However, despite Sanders’ defiance in the face of this media onslaught, he will undoubtedly be held back by the Democratic party establishment. In 2016, the ‘superdelegates representing the party establishment were used to bolster Clinton and undermine Sanders. Although the rules have been changed, they could potentially be called upon in the current campaign if no candidate receives an outright majority.

Whilst the Democratic party cloaks itself in progressive language, it is nothing but the party of the US imperialism.

The Democratic party was originally the party of the slave-owning Southern capitalists. However it moved in a liberal direction after FDR’s New Deal, which won support from the downtrodden elements of American society, particularly minorities. In like manner, the Republicans, the former party of the Lincoln and the Civil War, moved towards conservatism.

At no stage, however, has the Democratic party ceased to be the party of the American capitalist class, or even begun to move in that direction. As Gore Vidal famously said, “there is only one party in the United States, the Property Party … and it has two right wings: Republican and Democrat.”

The two-party system remains a vital pillar of American capitalism, representing the illusion of democracy whilst rigidly maintaining class rule.

The Democrats have demonstrated time and time again their commitment to upholding the interests of the American capitalist class.

Under Obama, the working class were forced to pay for the financial crisis through brutal austerity. Meanwhile, the repressive state apparatus was expanded: both at home, through the expansion of the border force; and abroad, through a tenfold increase in drone strikes. At the end of last year, almost two hundred Democratic Congressmen voted through Trump’s $738bn military budget, greenlighting his murderous campaign of devastation across the Middle East. 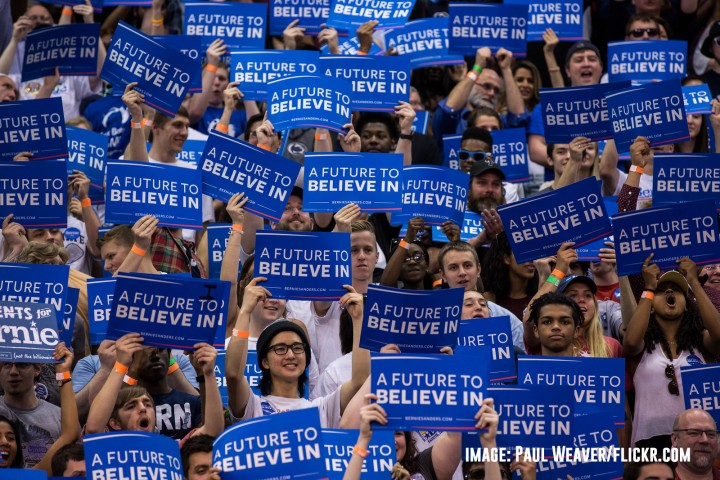 The cries of ‘unity’ from the Democratic establishment against the ‘divisive’ campaign of Sanders are in reality a demand for the subordination of the left to the interests of American capitalism / Image: Flickr, Paul Weaver

Sanders represents a threat to the Democratic party establishment - and not just because he denounces the system, calling for a political revolution against the billionaire class and opposing the interests of American imperialism. More than anything, he poses a threat to the elite because he has become a focal point for workers and youth, and has put the ideas of socialism and revolution on the agenda. This is inspiring ordinary people to fight against the inequality and injustice of US capitalism.

The cries of ‘unity’ from the Democratic establishment against the ‘divisive’ campaign of Sanders are in reality a demand for the subordination of the left to the interests of American capitalism. They speak of unity while systematically working to destroy Sanders’ campaign and eradicate the left.

These appeals to unity will evaporate if Sanders becomes the Democrats presidential candidate. The party establishment and their billionaire backers will wage a campaign to force him to cede ground and water down his policies in order to become ‘electable’. They will launch an avalanche of lies and slanders.

If Bernie does not back down, they will look to destroy him - either by supporting a third-party candidate; or even directly supporting Trump, who better represents the interests of US capitalism. Such ‘unity’ will quickly be shown to be that of the capitalist class united against the working class.

Even if Sanders were to win the Democratic nomination and the Presidential Election in November, he would not be able to carry out his programme against the resistance of Congress and the Supreme Court, which remain firmly in the hands of the ruling class.

Furthermore, as long as the commanding heights of the economy remain in the hands of the capitalists, they can hold the President to ransom with the threat of capital flight or a strike of capital. This will be the case even more so with the prospect of a new world slump.

For a workers’ party

As long as the two-party system remains in place, the American working class will be restricted to fighting for minor concessions through bourgeois parties. Their emancipation from the horrors of the capitalist system cannot be realised within this setup.

The American working class must break with the bourgeois Democratic party and establish a genuine workers party, linked to the trade unions, to fight for the socialist transformation of society.

This is a task that Sanders could have already carried out. The fact that he has not shows his limitations and his lack of confidence in the working class. With the huge movement of activists he has around him, as well as the vocal support he has given to workers’ struggles, a call by Sanders for a break with the Democratic party would gain a massive echo.

A genuine party of the working class would have widespread appeal in a country that has been ravaged by a decade of austerity; a country that is sick and tired of the two-party system that only represents the narrow interests of the capitalist class.

Such a move would have enormous implications - not only in the US, but globally also. It would shatter the American political system, opening the way for revolutionary developments down the line. As such, the creation of such a party is the urgent task of the US working class, representing a huge step towards the socialist transformation of society.