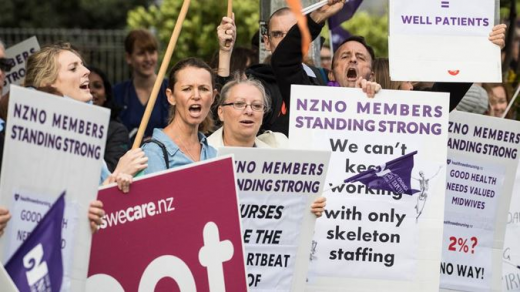 "It has been ongoing a number years with unsafe staffing, and remuneration that does not reflect our skills, education and level of responsibility."

Over her more than 20 years in the profession, Restall said there had been increasing pressures on nurses.

"We go home crying, it is so stressful. Many nurses do hours and hours unpaid overtime.

"The population has expanded, there are more patients coming in who are more sick, we have more diverse communities, we work with more advanced technology and medications, more protocols and regulations."It is challenging, and it requires more nurses."

"[The increase] is a start, but it needed to happen 10 years ago. We need extra funding to recruit more nurses, and decent remuneration to attract and keep them here, and stop them going overseas for better conditions and pay."

She said the pay increases should be over a shorter timeframe, and there needed to be an extra 1500 nurses nationwide, rather than the 500 promoted by the Government.

Life preserving services put in place today would ensure there was no drop in the level of care, she said.

"There has been a lot of work done to get those in place, and in some areas the rosters today are better than they would be on a day-to-day basis.

"Nurses are carers. We don't like to do this. It has been 30 years since the last strike. We feel completely undervalued."

The timing had nothing to do with the new government, rather the timing of the negotiations, she said.

"We have reached critical mass now, something needs to be done. Come on Winston, I doubt politicians would put up with what we put up with."

Nurse assistant Vijanti Kumar has worked at Auckland City Hospital for the past 14 years.

"When I started there was always enough staff. Now we are always short staffed," she said.

"We just can't keep up with the amount of patients."

The strike was not about money, but about providing better care, Kumar said.

"It is not safe for the patients. We need more staff."

Yet the response of the Acting Prime Minister Winston Peters was "We've gone as far as we can go as a Government. We got hold of a negotiated arrangement, which we inherited. The nurses have had a raw nine years," he said.

"We doubled the offer. We took it to half a billion dollars plus 500 more nurses and changed the pay scale in terms of promotion. That's the best we can do in six months and one Budget, and that's where things stand."

This rings rather hollow when it was stated on July 3rd that the government had allocated an extra $2.3 billion for the purchase of new military aircraft from Boeing for anti-submarine operations. Surely nurses are more important than anti-submarine warfare aircraft for hunting non-existent submarines with a virtually non-existent NZRAF in the South Pacific!

Drivers are angry that they are being forced to work for lower pay and long working hours with many drivers being called upon to work fourteen hours or more despite this being illegal under the Road Transport Act.

On the Newshub website dated July 27th it was reported: Kevin O'Sullivan from the Wellington Tramways Union says the drivers simply want legal hours: eight-hour days rather than 14.

Our members just want to get a collective agreement in place…and until that happens, the strike will be continuous."

When the Greater Wellington City Council awarded the bus contract to Tranzit, many drivers from previous operators refused to sign up, saying the pay and conditions left them worse off.

On August 15th, 2018, primary school teachers and principals walked off the job stating they were over-worked and burned out.

According to an article on the Stuff website (August 13th) it stated:

She sacrifices her lunch breaks to emails, meetings, and lesson plans for her class of new entrants, hoping it will give her time with her own children.

"I'm never enjoying what they're doing; I've always got my computer open," she said.

"I've been known to take books with me and sit in the car park, in my car working, while my children are doing whatever activities to keep on top of my responsibilities.”

The article goes on to state: Her colleagues at Christchurch's Halswell School feel the same. They speak of never-ending "to do" lists, 12-hour work days, and an inability to mentally switch off at nights and weekends.

They feel guilty when they stop working– it means they've probably forgotten something and they feel guilty about going on strike despite giving up a day's pay.

"A lot of our kids go to OSCAR after school so that gives us an indication that the parents are working," teacher Rachel Davies said..

This crisis in education has been building for years. Over a decade of cuts in education spending and the low pay of teachers that have failed to keep up with the cost of living, especially in the main cities, has put teachers under a lot of financial strain.

This low pay has come with increased work loads, much of it brought on by having to do more administrative paperwork that doesn't appear to be serving any real purpose.

These strikes are a sign that the New Zealand working class are becoming more militant. While these three strikes have been the ones that have captured the headlines they are not the only ones that have been happening around the country.  Much of this militancy has come on the back of over a decade of austerity, budget cuts and rapidly increasing costs of living, especially in regards to housing, where the average rent for a three bedroom home in Auckland is $547 a week. In Wellington the rents are even higher.However, it's not just pay levels that many workers are angry about. It's also the working conditions in which workers have to face. A decade or more of cutbacks has resulted in less workers having to do the job of more than one person. This has resulted in burn-out, fatigue and an upsurge in workplace accidents in recent years.

Since the Labour-led coalition government took office in 2017 the government has quickly shown itself to be little better than the National-led government it replaced. While many promises were made to improve the standard of living of workers it would appear that little has changed. Instead, they have made a few cosmetic changes that would be expected in a reformist government. However, the days of tinkering with capitalism and that being enough to pacify workers like in post-war period has drawn to an end long ago.Increasingly, the anger of the workers isn't just aimed at the government and their employers. It is being directed towards the trade union leadership and the Council of Trade Union where the lack of rank and file democracy / accountability of the union leadership, the lack of any desire to fight the bosses meaningfully and the general lack of any co-ordinated industrial policy, let alone a genuine socialist perspective, has seen the union leadership being increasingly sidelined.

Rank and file unionists are challenging the union leaders.The members of the nurses union have overturned their leadership twice on their recommended acceptance negotiated substandard pay and conditions deal, being clearly seen as a sell out by the members. Primary school teachers overturned their leadership by demanding a meaningful one day strike not the few hours strike offered by the union leaders. High school teachers have overturned their executive at stop work meetings to demand a 16% pay rise, with the leadership bleating that it is not achievable whilst preparing to sell out the members as quickly as they can.

During all three strikes the most telling observation was the silence of the Council of Trade Unions leadership, No support or solidarity. No calls for more militancy in the workplace. No willingness to criticise the Labour-led coalition.There was nothing to be heard from them.This is definitely a sign the trade union leadership has lost touch with the rank and file members.

What the Council of Trade Unions and other trade union leaders must understand is they can no longer rely on reformist ideas. Reformism won't change anything in the long run. History has taught us that reformist policies can be rolled back and destroyed if it suits the interests of the bourgeoisie. Militancy and a socialist perspective is the only way for workers to defend their interests and improve their lot. The evidence is clear, since the 1980s and the increasing class collaboration policies of the union leaders has led to where workers are today in a low paid highly deregulated labour market with growing job insecurity whilst the economy booms.